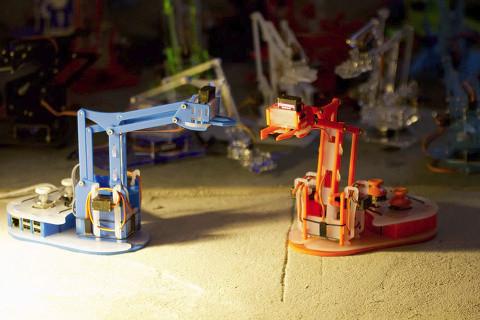 Our friend Ben Gray is back crowdfunding a new revision of his fantastic open hardware robotic arm MeArm, only this time he's bringing integrated smarts with it in the form of direct compatibility with the Raspberry Pi microcomputer.

We've long been fans of Ben's MeArm design, which hit v1.0 back in 2015, and the revised design includes numerous improvements made together with Mime Industries partner Ben Pirt. Chief among these is a simpler build process, with the redesign doing away with a full two-thirds of the screws and each servo being sent out fully pre-calibrated - doing away with one of the trickier parts of the original MeArm build process.

The biggest change from the original design, though, is the integration of computer-controlled smarts to make the new MeArm - known as the MeArm Pi - an entirely standalone device. Based on the MeBrain microcontroller, the two Bens have built a Hardware Attached on Top (HAT) board for the Raspberry Pi which provides full joystick control and drivers for the servos. Better still, the MeArm Pi includes the same in-browser programming capabilities as the Mirobot robot - meaning that, in addition to addressing it from any GPIO-compatible programming language on the Pi itself, you can program the arm in any browser using languages including Python and JavaScript or the block-based Snap!.

Unsurprisingly, the MeArm Pi crowdfunding campaign has been a smashing success: with more than two weeks to go the pair have almost quadrupled the modest £10,000 project goal. Full information on the new arm is available from the campaign page, with pricing starting at £25 for the Pi HAT, £60 for the HAT and MeArm Pi kit, and £110 for a bundle including the Raspberry Pi and all required accessories.