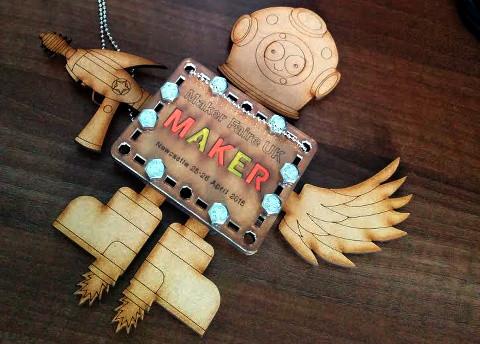 The most wonderful time of the year is nearly here once more. No, we're not talking about Christmas: there's less than a month to go to Maker Faire UK 2017, the greatest show and tell on Earth - and we're absolutely thrilled to be attending once again.

Last year's Maker Faire was absolutely jam-packed with wonders, from singing Tesla coils courtesy the Lords of Lightning to Mitch Altman's soldering workshop, Copenhagen Suborbital's space rockets to Matthew Little's clever electronics kits, and from the Newcastle Maker Space's Penguin Race to Leeds Hackspace's interactive light display, there was something for everyone - and we're expecting even more sights and sounds to enjoy at the Maker Faire UK 2017.

Naturally, we'll be there showing off OOBB, our open hardware building block system which allows you to create almost anything using standard pieces produced on a laser cutter or 3D printer. We're not going to be alone, either: the list of makers is impressively long, with everyone from local radio control group Take-Off and Grumpy Mike Cook's Electro Gadget to various national Hackspaces and Maker Spaces signed up to show off their creations.

As always, Maker Faire UK is being held at the Life Science Centre in Newcastle. If you're interested in attending, tickets are available from the official website with a 25% discount for all Life Annual Pass holders and free tickets for under fives. Be sure to drop us a line if you're coming along, and we'll see you there in April!